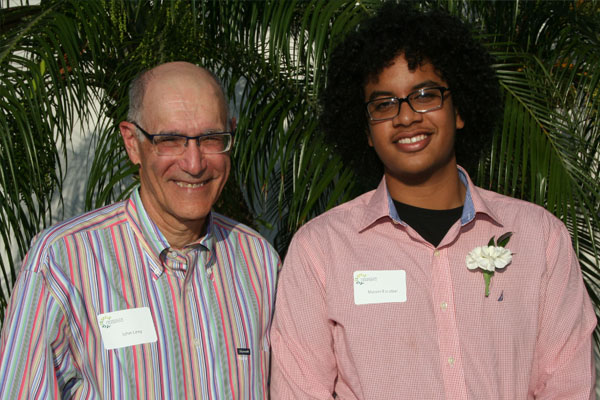 It sounds like a movie trailer. The son of immigrant parents interns for a state legislator, and becomes one of the youngest board members of a prestigious scholarship program.

But this is no movie. This is Moises’ story.

Moises and his family relocated from Chicago to Naples when he was only in 7th grade. During this time, Moises decided to apply to the Take Stock in Children Scholarship and Mentoring Program

“I kept hearing them announce the program and how we should apply,” says Moises. “As a 7th grader, being in higher level classes and having teachers tell me about the program, I knew I had to apply.”

He was accepted into the program where he was paired up with his mentor John Levy. Through John, Moises found support for his hectic senior year in high school.

“John had a huge impact on my life,” says Moises. “During a time when I was hearing so many opinions about what I should do, John was able to help me make my own decision.”

This decision resulted in Moises attending Florida State University, where he majors in English Literature.

While at Florida State University, Moises made sure to become very involved in campus. Through his involvement, Moises became a part of the board of the Southern Scholarship House.

“It was an amazing experience,” says Moises. “I was able to give a voice to the students.”

After serving on the board, Moises interned for a state legislator.

“My internship showed me what it takes to get a bill passed. I realized it’s not a 1+1 formula. It’s an extremely long equation.”

Moises has learned not to take any assistance he received for granted.

“Through my experiences, I’ve grown an appreciation for Champion For Learning. I’ve realized that things don’t just happen. That there’s people in the background doing an incredible amount of work to help students like me. I’m extremely grateful for that.”

Your ticket for the: Student Highlight: Moises Escobar