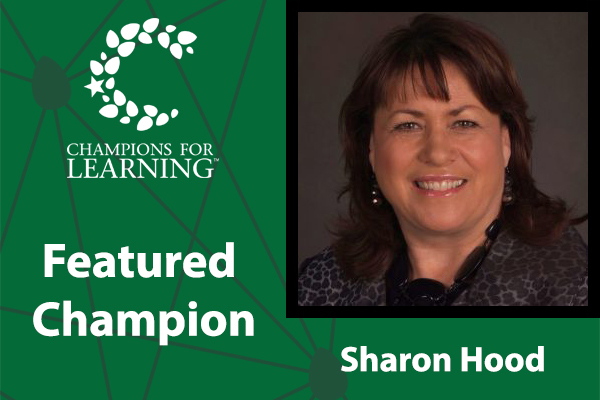 “Having an undergraduate degree in elementary education, I have always admired teachers,” says Sharon Hood found/publisher of èBella magazine and MarketCrank Inc. Champions For Learning media partner, and former Champions For Learning board member, “I’m always inspired by how creative teachers can be and their ability to bring this creativity into the classroom.”

Twenty-three years ago, Sharon left her marketing job and moved to Naples where she began to work for the Naples Area Board of Realtors as Deputy Director. Despite having multiple job responsibilities, Sharon still missed the creative outlet marketing provided her. This led Sharon to do freelance work. Soon, Sharon’s freelance work inspired her to create MarketCrank, a communications firm.

“It was scary to jump ship,” says Sharon, “I never thought of myself as an entrepreneur. I was in a make it or break it situation.”

Soon after starting MarketCrank and taking on the publishing of the Pelican Bay Post, Sharon began playing with the idea of starting a magazine.

“As a freelance writer, I interviewed some fascinating local women with inspiring stories. I knew I had to find a way to share them with other women, she says.

In December of 2007, the first issue of èBella came out. Having a busy schedule didn’t deter Sharon from wanting to give back.

“Part of èBella’s charter is to give voice to local charities,” says Sharon, “and I thought that part of what we can give is exposure.”

This charter gave Sharon a small push to become involved in the community, but it was Jim Hoppensteadt and ultimately her deep appreciation for teachers that led her to join the Champions For Learning board where she served for 3 years.

“Students are our future,” says Sharon. “We need to make sure that they’re given every opportunity to soar.”

When reflecting on her impact, Sharon says, “You don’t always know when you’re making an impact. That’s the reason people get involved. It’s because we want to make a difference.”

Your ticket for the: Featured Champion: Sharon Hood